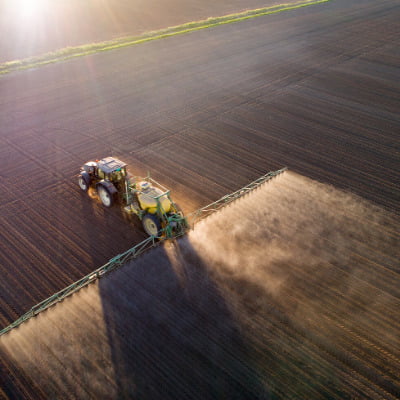 Farmers feed cities. And there are a lot of cities. With a lot of people. So, the name of the game in agriculture has become how to grow more, and how to do it fast.

Techniques and tools have been adopted to accomplish this, including fertilizers, pesticides, and fungicides. But could this constant growing with an array of products be harming the soil and thus the produce?

The answer is yes. Very much so.

The history of soil depletion

Soil contains minerals, nutrients, bacteria, and fungi that all contribute to the ecosystem. These nutrients are vital for plant growth – just as vitamins and nutrients are essential for humans – and the bacteria and fungi can either assist in the plant’s health or inhibit it.

There is evidence that the issue of soil depletion has existed since the First Agricultural Revolution (circa 10,000 BC). Farmers were always aware that overusing land would yield lower crops. So, they would simply move onto another field and allow the soil in the previous field to replenish naturally. However, by the mid-1800s, this method was unsustainable.

In Europe and North America, population growth and urbanization led to the need for more food, which meant more farming. In the decades between 1830 and 1870, this became a pressing issue. Farmers didn’t have the time or space to move from one field to another. They had to find a way to grow more food, faster. And they did. [1-2]

The birth of intensive farming

Following the use – and near extinction of – natural fertilizers, like guano, fertilizer development continued until nitrogen, phosphate, and potassium manufacturing began. However, today our population is booming, and the demand for food is great. This leaves most farmers using a method referred to as intensive farming. This is the employment of modern machinery, fertilizers, and other products, along with various techniques to yield as many crops as possible, with as little labor or cost as possible. [3]

But it’s a temporary solution to an ongoing problem…

The issue, however, comes back to soil depletion. The use of fertilizer was great at first. But it’s a temporary solution to a problem humanity will be facing for as long as we want to be eating.

See, when fertilizer is sprayed onto the soil, it leaks into the groundwater or nearby waterways. The nutrients then stimulate the growth of microorganisms, pulling oxygen from the water, killing, and inhibiting aquatic life. This leads to a chain reaction of ecosystem disruption.

Like the bacteria in your gut, some bacteria and fungi in the soil are good, and some of them are bad. However, when a fungicide is sprayed to kill the bad fungi, it also kills the good fungi, removing an important element in the soil that leads to plant growth.

The constant disruption of the soil, added substances, the mixing with machinery, and so on, eventually leads to soil exhaustion. This results in poor crop yields, or even the inability for anything to grow properly, including a cover crop.

However, since the need for food is so high, farmers have no choice but to use even more fertilizer, and stronger ones, which only exacerbates the problem. The more they use, the more they need to use next time. And, because the natural ecosystem which contributed to the crop’s growth is diminished, something else becomes diminished… [4-6]

Studies comparing fruits and vegetables between generations have found staggering results. For example, you would have to eat 8 oranges today to get the same amount of vitamin A that our young grandparents would have gotten from eating just one.

One study from the Journal of the American College of Nutrition looked at the data of 43 different vegetables and fruits from both 1950 and 1999 and found “reliable declines” in the amount of protein, calcium, phosphorus, iron, riboflavin (vitamin B2), and vitamin C.

Some farmers trade more nutritious seeds for ones that grow faster and bigger, despite lower nutrient levels. [8]

So, what can you do?

Advocates are working with farmers on the inside, trying to teach ways to farm with sufficient yields, while keeping true to the local ecosystem. In the meantime, experts urge people to support local and organic farmers, as – in most cases – they are already farming with these issues in mind.

You may also need to take conscious steps to ensure you’re getting enough of the nutrients you need.

For example, foods like broccoli, red peppers, and oranges are known for their vitamin C count. But knowing what we know about soil depletion and fewer nutrients in produce, how can we be sure how much Vitamin C we’re getting from those foods?

You may need to consider supplementing…

Make sure you’re getting your vitamin C

Running low on vitamin C is no joke. It’s part of what your body needs to produce collagen, an important element in connective tissue and healthy aging. It also works to support your immune health, help keep your cortisol (stress hormone) levels in check, and may assist in reducing free radical damage.

Surprisingly, about 7% of people are deficient in vitamin C. Because your body cannot store large amounts of vitamin C nor create it on its own, the vitamin must be consumed regularly via your food, OR via a supplement… [9]

At PuraTHRIVE® our Micelle Liposomal Vitamin C is designed with bioavailability in mind. Our patented Micelle Liposomal delivery protects the fragile Vitamin C molecules from breakdown in the digestive tract and enhances absorption to the bloodstream delivering the powerful serving right where you need it. [10]

With Radiant C you can be sure your body is getting a healthy dose of this vital nutrient, so you can focus on feeling great and living your best life!

1.     Soil: The Foundation of Agriculture – Nature

4.     The Damaging Effect of Fertilizers on Marine Ecosystems

6.     Soil: The Foundation of Agriculture – Nature

8.     Why It’s Time to Stop Punishing Our Soil With Fertilizers